Summary. During the winter of 2010, mean seasonal temperatures in Europe are forecast to be close to the 1971-2000 average; however, a strong month-to-month variability is expected. In December, the North Atlantic Oscillation (NAO) will be in the positive phase, and unseasonably warm temperatures will dominate much of Europe, with the strongest positive anomalies in Scandinavia. Colder than normal temperatures are forecast for the Mediterranean region. In January, the westerly winds will start weakening, and the outbreaks of cold arctic air will become more frequent. As a result temperatures in Europe will be more seasonal. In February, the NAO index will turn negative and the temperature anomaly pattern will be almost opposite to that in December. It will be the coldest month of the season. 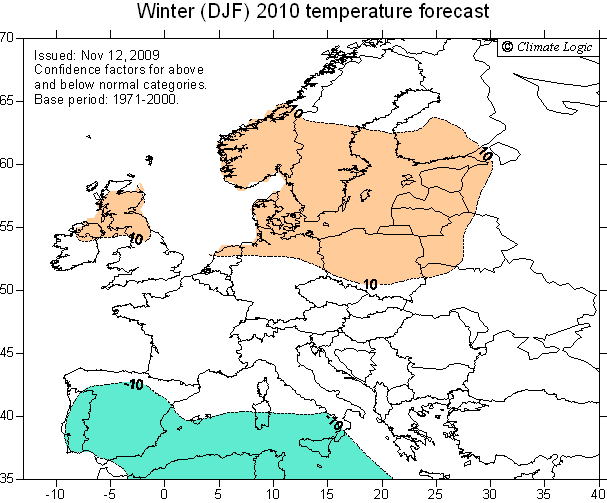 During the winter of 2010, mean seasonal temperatures in Europe are expected to be close to normal (Fig. 1), due to a neutral phase of the North Atlantic Oscillation (NAO). The signals regarding the NAO phase this winter are conflicting. On the one hand, the evolution of sea surface temperature (SST) anomaly pattern in the North Atlantic in recent months is conducive to a negative phase of the NAO. Another line of evidence involves the Greenland blocking (GB) index, which is forecast to be positive as a result of a combined effect of solar activity and stratospheric quasi-biennial oscillation (QBO). A positive GB index indicates a negative NAO phase and lighter sea-ice conditions in the Davis Straits/Labrador Sea region. On the other hand, the distribution of SLP anomalies in the Pacific basin suggests a positive phase of the NAO. Due to this conflicting signals a neutral phase of the NAO is considered to be most likely.

When the NAO is in its neutral phase, the effect of ENSO on Europe becomes stronger. This effect includes stronger than normal westerly wind in the North Atlantic-European sector during El Niño events. Unlike the positive phase of the NAO, however, the primary storm track is shifted southward. When the NAO is positive, storms usually travel north of Scandinavia into the Bering Sea. In contrast, during El Niño events storms tend to go across the British Isles and the Baltic Sea. Therefore northern parts of Scandinavia and the Bering Sea may see negative temperature anomalies, particularly in the second half of the winter. The secondary (Mediterranean) storm track may also become more active this winter.

Generally speaking, zonal atmospheric circulation leads to warmer than normal temperatures in Europe. However, during El Niño events the westerly wind are not as strong as during positive NAO phases. It is also interesting to note that a transition of the stratospheric QBO from its west phase to east phase was halted in past four month. The stratospheric westerly winds over the equator even strengthened in September and October. It is possible that when 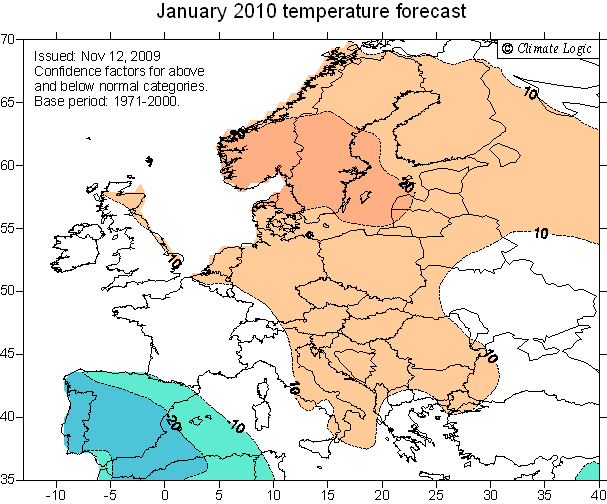 this phase transition resumes later this year, it can be sharper than usual, which eventually may reduce chances of Europe to see warmer than normal winter. The low level of solar activity should also be taken into account. Winters in Europe tend to be colder than normal during minima of the 11-yr solar cycle, but this signal is not very pronounced.

Although mean winter temperatures in Europe are likely to be close to normal, a strong month-to-month variability should be expected. In December, westerly winds will be strongest of the season, and temperature anomaly pattern (Fig. 2) will resemble the one for the positive NAO. Unseasonably warm temperatures will dominate much of Europe, with the largest positive temperature anomalies in Scandinavia. Colder than normal temperatures are forecast for the Mediterranean region. In January, the NAO 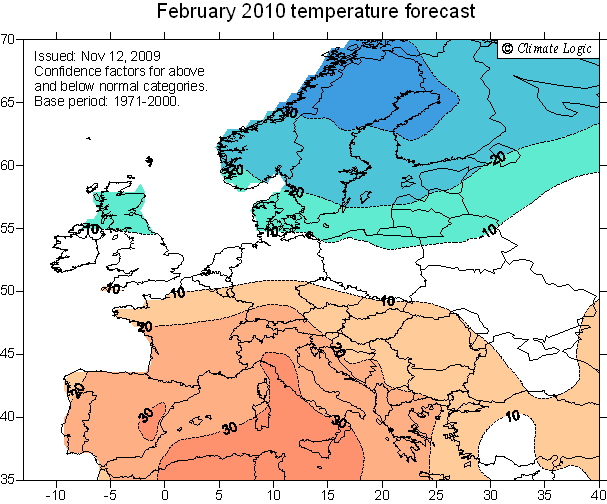 index will be close to zero or slightly positive. Although positive temperature anomalies are still forecast for mush of Europe (Fig. 3), their confidence factors are lower than in December. It means that they are likely to be close to normal. In February, the NAO index will turn negative and the temperature anomaly pattern will be almost opposite to that in December (Fig. 4). It will be the coldest month of the season.

As for the other available forecasts, the CFS model continues to predict colder than normal winter over much of Europe, particularly in the Baltic states. The Met Office forecast calls for warmer than normal temperatures in the British Isles, Scandinavia and western Mediterranean, and near normal elsewhere. The multi-model forecast from the IRI shows higher probability of anomalously warm winter in west Europe and near normal in central Europe and Scandinavia.