Disneyland to stimulate a theme park development in China 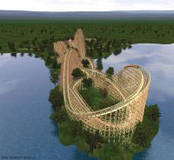 Zhong Xi, a Fudan University graduate, is eagerly anticipating the opening of the new Disneyland park in Shanghai, although work, which starts this month, is not expected to finish until 2014.

"I have called on my classmates to have a reunion on that day - five years after we graduate from university," Zhong said.

Many of her classmates are Mickey Mouse fans or enthusiasts of other Disney cartoon figures. They were all born after 1980, and Mickey Mouse clothes, Donald Duck stationery or Snow White dolls are part of their childhood memories.

It is reported that Shanghai Disneyland will include a Magic Kingdom-style theme park with characteristics tailored to the Shanghai region.

"I am wondering what the result of combining Western cartoon figures with Chinese elements will be like," said Zhong.

Disney has been fortunate in not only capturing the hearts of many young Chinese Mickey Mouse fans but also being surprisingly welcomed by its Chinese competitors.

A few years ago, Liu visited 12 theme parks in Japan within nine days to make a survey of the influence that Tokyo Disneyland had on the local industry. He found the Disney resort promoted the development of other local parks.

He took the United States as an example. Before Disney set up its resorts, the country had only three parks that boasted more than one million visitors per year. After Disneyland opened, the number of overall visitors in the country quickly surged to more than 10 million annually.

The same situation happened several years later in Hong Kong. When Walt Disney launched its third overseas theme park in the city in 2006, other amusement parks in Hong Kong, such as Ocean Park and the adjacent Shenzhen Happy Valley, all witnessed a rapid increase in annual revenue and number of visitors.

"It's like when lovers celebrate Valentine's Day. One couple would only buy a small cake to celebrate the day, but if they are going to hold a party, there will be more people to eat the cake and the cake is expected to be big enough," said Ren Kelei, board chairman of OCT.

Ren also compared Disney with a teacher in terms of theme park operations, and OCT as a Chinese student.

"Now the teacher has come to Shanghai. The student is going to have a face-to-face lesson. Who will learn more and grow more quickly during the same period? Of course, the student will!"

Ren said OCT has set its goal high to be the No 1 theme park brand across China, saying he believed Disney would not build five Disney parks on the Chinese mainland, whereas OCT had the ability to build five, or even 10 Happy Valley theme parks in the country.

"To compete with Disney, OCT wants to turn the one-to-one fight into a one-to-many fight," said Liu.

Investment of 25 billion yuan ($3.79 billion) is reportedly being put into the Shanghai Disney project, in comparison with the 2 billion yuan that OCT invested in Shanghai Happy Valley in the first phase of construction work.

It's like a tiny dwarf fighting with a giant, Liu said, so OCT needs a strategy to develop more theme parks in major Chinese cities and form a park chain to compete with the US company.

OCT has invested more than 16 billion yuan over the past 25 years to build theme parks. It has finished the first round of strategic theme park construction in Shenzhen, Beijing, Shanghai and Chengdu, and has started the second round of park development in cities including Wuhan and Tianjin.
OCT has received 164 million visitors to its theme parks, and has earned a total of 17 billion yuan so far.

According to surveys conducted by OCT, Disneyland may have an attraction to children, but many young people prefer visiting parks that boast large game equipment, such as the Universal Studio theme park.

When people go to Happy Valley, they will scream when riding a steep roller coaster or break out in a cold sweat when exploring the ghost house. OCT said it invests at least 30 million yuan in every theme park to develop new recreation projects every year.

Furthermore, entrance tickets for Happy Valley are about 50 percent cheaper than those for Disneyland. Liu said Happy Valley charges 200 yuan per person. However, Disney usually asks for more than 400 yuan per head around the world.

"Our theme parks may be more suitable for China's present conditions," said Liu.

He expects the number of visitors to OCT's theme parks to surpass 20 million this year, with the figure continuing to rise to 30 million a year by 2020.

China has a huge market for theme park operators. According to Wu Wenxue, vice-chairman of the China Tourism Association, over the next five years, the market demand for theme parks may surpass 10 billion yuan a year.

"China could have 10 or even more theme parks of a size similar to Shanghai Disneyland over the next 25 to 30 years," said Wu at a theme park forum in September in Changzhou, Jiangsu province.

At present, China has around 2,500 theme parks with a total investment of 300 billion yuan, but only a quarter make a profit, according to Chinese media reports.