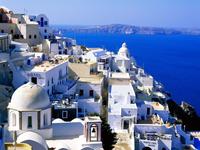 Destination Greece has updated its website with a new section to address travel agent concerns about recommending or booking their clients to Greece. Topics and questions covered include...
Is it safe to travel to Greece in view of the financial situation the country is in?

Yes, it is as safe as traveling in any European Union country. The financial state of affairs does not have direct impact on tourism. Having local presence in Athens, Greece we have first hand experience of the life in the country and we can attest to the safe conditions in Athens and beyond. Having said this, and independent of the travel destination, we always suggest our clients stay abreast with the latest US Department of State travel news.

Is it a good time to visit Greece now?

It most definitely is. U.S. travelers to Greece can enjoy gains:
because of the all-time lows in exchange rates of Euro to U.S. Dollar in their favor,
because travel professionals in Greece have reduced rates and increased quality service to counterbalance the effects of Eurozone financial crisis affecting the country,
the quality of the travel product offered by Greece (culture and antiquities, sun, sea) is among the highest in the world.

Is my trip to Greece going to be affected?

Almost all of Europe is on strike because of recent austerity measures. Greece would not be an exception to what happens in Europe. However, so far in 2012 there have been no strikes or protests affecting client itineraries. Having said this, Destination Greece through its local presence in the country, has a number of alternative proposals and contingency plans in place in case unexpected changes in client itineraries have to occur due to strikes or due to delays caused by strikes.

No, it is not. It is true that Greece has received low marks by international ratings agencies. However, Portugal, Spain, Italy and even Austria, the Netherlands and France have received low marks for their banks and economies. What is most important is that Greece represents only a very small fraction of EU economy as compared to Spain, Italy, the Netherlands or France. Greece has low financial ratings but has not defaulted.

What’s the story with elections in Greece?

Greece held elections on May 6th as per the Constitution of Greek Democracy. The results did not allow formation of a stable and viable government as votes were split between a large number of political parties. Greek Constitution defines the roadmap in such a case. New elections will be held on June 17th. This is the standard procedure followed in all democratic countries. It is worth noting that Belgium did not have an elected government for close to two years (2010-2011). Italy on the other hand has held 61 different governments since 1945. So, Greece holding two elections within a few months is not such a rare event in world politics.

Is Greece going to be ousted from Eurozone?

It is important to understand that the crisis faced in Greece is a European union systemic issue rather than a Greece financial crisis. Whereas there are rules and procedures for a country being accepted in Eurozone, there are no rules or procedures for a country exiting Eurozone. In other words Greece cannot directly be ousted from Eurozone. Can it be led to chose to leave Eurozone? Sure, but then this is a question that involves both the Greek people and their government, as well as Euro partner countries. The concensus seems to be that Greece out of Euro would lose less than the ones left in Euro, however

What one can do is gauge the views held by experts in the matter such as:

European Commission President Jose Manuel Barroso: “We want Greece to stay in the euro area … the European Union will do all it takes to ensure it.”, May 17 2012
“French president, Francois Hollande, and the German chancellor, Angela Merkel, agree to work closely on growth in Europe. Both leaders reiterate their support for Greece, and for the country to stay in the Eurozone”, guardian.co.uk, Wednesday 16 May 2012

Eurogroup chief Jean-Claude Juncker: “I don’t envisage even for one second Greece leaving the euro-area. This is nonsense, this is propaganda,” May 14 2012, Euobserver.com