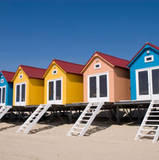 DEL MAR — Del Mar voters will soon be asked to decide whether people renting beach cottages should be responsible for paying the same tax paid by guests staying in local hotels.

If approved, the change would raise an estimated $181,000 annually to help the city pay for beach and park maintenance, fire safety and law enforcement.

The City Council voted unanimously Monday to place on the June 8 ballot a measure that would extend the city’s 11.5 percent hotel tax — known as a transient occupancy tax — to vacation rentals of houses and duplexes. The existing tax applies to stays of 30 days or less in multiunit properties, such as hotels, rooming houses, apartments and condominiums.

The ballot measure will require a simple majority to pass.

Del Mar Mayor Richard Earnest said after the meeting that the tax would eliminate an “unfair advantage” for the small rentals over hotels. “It’s a way of defraying some of the (city) expenses associated with frequent renters coming through,” he said. For example, people on vacation generally use the beach more than locals, adding to the burden on lifeguards, and using restrooms and parking spaces, he said.

Del Mar is a popular vacation destination, with visitors drawn by its pristine beaches and quaint downtown, and the Del Mar Fairgrounds, with its county fair and summer horse races, draws millions of people to the area.

Six people wrote letters to the city, with five opposed to the tax and one in favor of it.

Del Mar resident Hershell Price wrote a letter that said, “The timing could not be worse” for the proposal.

“Regulation and taxation of these few mom-and-pop rental units at this time would not be a very wise move,” said Price, who is the husband of county Supervisor Pam Slater-Price. “These few tourists who stay in these part-time rentals help to boost our local economy by visiting our restaurants and shops.”

Price said the tax would be difficult to enforce and could create an “underground economy” of small property owners “who don’t want to comply just because they may rent out their unit once or twice during a season, if these days they are lucky enough to do so.”


Another resident, Edward Yuskiewicz, said in a letter that most people in the beach colony own extra houses or duplexes primarily for guests, not income. They rent them by the week during the summer, but leave them vacant for much of the year, he said.