Animal Travel Safety: Protecting Your Pet in the Air 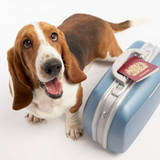 But when baggage handlers in Chicago pulled him off the plane, they made the heartbreaking discovery that Buddy had passed away. A veterinarian examining Buddy found no cause of death, and the case was closed, according to a Department of Transportation Pet Incident Report.

Unfortunately, Buddy's tragic story is not an isolated incident for pets traveling in the baggage hold of an airplane. From November 2008 to December 2009, a tally of DOT reports revealed 27 deaths and seven injuries of pets on domestic airlines.

The Humane Society of the United States warns pet owners that pets should not travel by airline unless absolutely necessary. Although baggage holds are an adequate environment for most pets, some can subject animals to temperature extremes, poor ventilation, and low oxygen levels, according to the HSUS.

The fear of unfamiliar smells and piercing sounds during take-off can lead to injury as well. In November, a dog unloaded from Alaska Airlines Flight 645 from Phoenix arrived in Seattle in a “distressed state."

However, if air travel is unavoidable, there are several ways to reduce the risks. “If your pet must travel by air, your best option is to keep him on board with you,” advised the HSUS.

In response to a 2005 federal regulation requiring airlines to report mishaps, some airlines have put an end to pet cargo transport altogether.

Each airline can set its own rules about in-cabin transport of pets, from the size of the carrier to the weight of the pet. Some airlines consider the carrier part of the carry-on allowance, charging for additional carry-ons.

While considering whether to transport your pet by air, you should also take possible restrictions by pet breed into account. Some airlines, taking note that brachycephalic, or short-nosed, dogs are more likely to suffer in airplane transport, restrict those breeds from coming on board.

"Certain breeds such as brachycephalic dogs and cats may have difficulty with air travel," the American Veterinary Medical Association said, noting the respiratory issues that go along with those cute flat noses.

The feline snub-nosed breeds flying at their own risk are the Burmese, Exotic, Himalayan, and Persian.

Are there some airlines that have a better track record than others? The statistics generally correlate with the total number of an airline's flights, but certain carriers go the extra mile to keep pets safe and happy.

Continental Airlines, for example, received an award for excellence from the Independent Pet and Animal Transportation Association for its PetSafe program. Continental's customers can track their pet's journey on its cargo website while their pets earn travel miles throughout the trip.

Although touted as a PetSafe feature, such climate control is in fact a mandate of the Federal Animal Welfare Act, which prohibits airlines from exposing pets to extreme temperature for more than 45 minutes between terminal and plane, or for more than four hours in a holding facility.

The Welfare Act also prohibits pets from being exposed to temperatures less than 45 degrees Fahrenheit or 7.2 degrees Celsius. Perhaps for this reason, Alaska Airlines and Horizon Air will refuse acceptance of a pet if airport temperatures at the origin, destination, or connecting airports exceed certain limits.

Protecting the airborne pet is ultimately the owner's responsibility, so common sense can carry a pet a long way. According to the AVMA, owners would be wise and compassionate to choose early morning or late evening flights in warm weather, and midday flights in cold.

And, cautions Alaska Airlines, try to stick to direct flights for a healthy landing.