A Tale of St. Valentine's Day 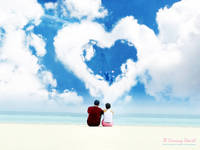 Every year, on February 14th, people everywhere send flowers, candies, and cards to their love-interests or “Valentines“. Ironically, it is not really known for sure where this ritual of love began. There are three saints, by the name of “Valentine” which are recognized by the Catholic Church, and all of them have been martyred.

One story tells us that Valentine, who was a priest in Rome during the Third Century, gave his life in the name of love and romance. Emperor Claudius II outlawed marriage for young males, because he felt that being single made a soldier better able to focus on victory than having a wife and family. Since only single men were expected to fight in wars, the Emperor felt that men were getting married to avoid going to war. Valentine felt the law was ludicrous and continued to perform marriages secretly, for the Christian men to whom marriage was such a sacred expression of their love. This story goes on to tell of how St. Valentine helped the Christians, who had been imprisoned by the Romans, escape from the horrible Roman jails where they were being tortured. Valentine was finally found out and was imprisoned himself. While in the jail, it is said that Valentine fell in love with the jailer’s daughter, who came to see him in his cell. He was reported to have sent her written tokens of his love, and ended them with the signature, “From Your Valentine” a saying which is still used today.The Christians were also said to have visited Valentine and left him little notes about how much better love is than war. According to legend, the Emperor actually liked Valentine, until Valentine tried to convert the Emperor to Christianity, at which point Valentine was ordered to be put to death.

It has also been said that Valentine’s Day goes back even farther and was traditionally a pagan tradition. Apparently, according to legend, the Roman’s celebrated this day in honor of the goddess of marriage, and queen of all the Roman gods and goddesses. One of the rituals included all of the women of a village putting their names into a box. The men of the village would draw a name out, and these two were paired off for a year. It is also said that the Romans celebrated February 15th as Lupercalia, which was in honor of the fertility god, Faunus. This celebration was performed by the men of the town sacrificing a goat, wearing goatskin, and running around slapping the females with small whips made of strips of goatskin dripped in blood. The women liked this and wanted to be hit with the whip, as it supposedly ensured fertility. Often, these couples ended in marriage. This tradition was said to have been changed by the Christian church because the “coupling before marriage” was morally degrading.

According to the pagan version of Valentine history, Emperor Gelasius changed the celebration to February 14th and named it as a Holy Day in honor of Valentine, instead of a day to honor the pagan gods or goddesses. This allowed the Christians to discard the moral uncleanliness of Valentine’ Day, so that they would be allowed to celebrate it as well. During the Renaissance, when love and romance were abounding so freely, Valentine’s Day took on more of the Holiday of Love that it has become today.

Valentine’s Day is no longer recognized as a religious holiday. The Catholic church took it off their calendars in 1969. It is a far more commercialized holiday than and history denotes, sadly, just as Christmas is becoming. In spite of this, many societies still frown on Valentine’s Day because of it’s history in Christianity. In India, it is said that some people threatened anyone who celebrated any Christian Holidays, including Valentine’s Day, and young couples who were caught in public on Valentine’s Day were assaulted. In Saudi Arabia, it was forbidden for Muslims to do anything at all to celebrate Valentine’s Day. Whether it was truly a pagan holiday or a Christian one first, does not seem to matter much now. Throughout history, Christians are the ones who seem to have risked and given their lives to celebrate love. For pagan and other religions it seems that Valentine’s Day was always simply a celebration and good time. Both versions of the story link it back to the sanctity of marriage.

Whichever version of the story of St. Valentine that you are most fond of, today this is a day set aside to show feelings of love, and to be romantic with your “Valentine.” Whether you choose to celebrate with chocolates and hearts, or dinner and wine, remember the stories of where this day came from, of those who died for love, and those who celebrated fertility and marriage. In the middle of all of the red cellophane and little message hearts, is a history, that is far greater than the money to be made by department stores by those who wish to celebrate “St. Valentines Day.” Use this day to show your love, not just in what you buy, but in who you are.

That is a Tale of Valentine’s Day. How much of the tale is truth, no one will ever know for sure. In honor of Love, and Romance, and all that this day now entails, I will be writing an article everyday until February 14th. I thought it would be good to start out with a little history of where this holiday came from. Be sure to check back for ideas on how to celebrate this day, romantic places to go, dinners to cook, and gifts to give! Happy Valentine’s Day! Be sure to Retweet and Buzz Up! You’ll do this for me, won’t you? Thanks!